Universal milling machine: is a type of machine used to process many different surfaces, such as plane milling, inclined milling, slotting, profile milling, etc., including horizontal and vertical milling machines. In addition to the milling function, these machines can also process holes such as drilling, boring, etc.

Body: this is the basic part of the machine, in this form the body has an integral structure with the base of the machine. It is cast in cast iron in the form of a box, under the hollow base of the machine used to store cold fluids. In the vertical body containing the motor and transmission system for the main shaft (speed box), the upper has a slide joint with the upper cover to allow the upper cover to slide back and forth when attaching the long tool shaft. The front of the body has a slide to merge with the cantilever beam and allow the cantilever beam to slide up and down gently, and the body also contains the machine’s electrical control system. 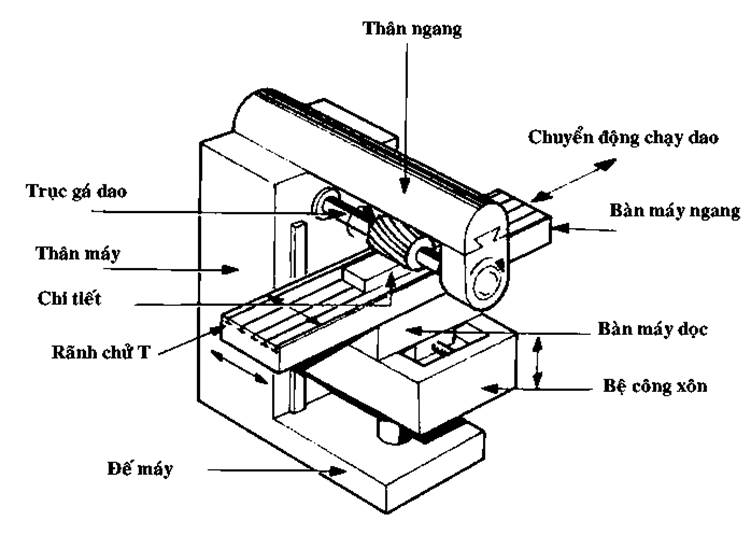 Top cover: cast in box cast iron, with sliding tenon to slide smoothly over the body. For cantilever vertical milling machines, there is no top cover.

Cantilever girder: is a box-shaped part made of cast iron, with a vertical slide to match the upper body’s slide with a gentle sliding longitudinal beam on it. Inside the cantilever beam contains the toolbox, the screw nut system to create vertical and vertical movement along with the handwheels and levers.

Vertical tool table: has the form of a thin cast iron box, the bottom has a slide to match the longitudinal slide of the cantilever beam, the top has a sliding tenon so that the table can move gently on it. The inside contains a system of horizontal knife reversing box.

Machine table: is a part used to attach workpieces when machining, it has a rectangular cast iron shape, the bottom has a slide to match the sliding tenon of the vertical tool table and the screw nut system to create the tool movement. horizontal, the top has T-slots used to hold the screw head or T-nut when clamping the part or fixture.

Auxiliary tool head: is a tool used to change the direction of the tool axis to expand the technological capabilities of the milling machine (usually used for horizontal milling machines). It allows you to rotate the tool shaft at any angle relative to the table.

Universal milling machine CNC, machining centers, …In this type of machine with automatic digital control, it is often said that the number of tool movement directions is called the number of axes.

The horizontal is the X axis.

The vertical direction is the Y axis.

The vertical is the Z axis.

In addition to the 3 X, Y, and Z axes, the machining centers also have a 4th axis denoted B.

When using the machine and turning it off, it is necessary to follow the procedure

When turning on the machine:

Check the lubricating oil in the necessary positions, such as sliding waves, tool heads, etc.

Check that the clutch mechanisms must be in the zero position, which means they are not engaged.

Turn on the  universal milling machine  to idle (only turn on the electric motor) if the main motor has erratic sound, turn off the machine and notify the maintenance technician to check.

Check the direction of rotation of the tool, open the universal milling machine  to run at the lowest number of revolutions, if normal, correct the required speed.

Move the clutch lever for the table universal milling machine that runs automatically in the vertical, horizontal and vertical directions. If normal, switch back to zero position.

Do not change the spindle speed, feed amount while the machine is operating.

Set the clutch lever to zero position to stop the automatic feed.

Move the knife away from the part by a small distance.

Turn off the main shaft.

If the machine stops for a long time, turn off the main switch.