A thread rolling machine for bolts, screws, and studs can create a number of products with standard thread quality of hundreds of the same.

Bolt thread and screw thread have different differences, but in essence the threads of the details are torque loops that are evenly spaced between one ring and the other. Bolt thread mill and screw thread mill have the same structure, only the difference is in the tip of the threaded blade. To better understand how people create the characteristics of bolts and screws with Smart Vietnam, learn about this useful thread rolling machine.

Thread rolling, also known as thread press roller, is a new method of machining that does not produce chips (chips are the part of metal that is removed). Round billets are placed between pressing rollers, which are rollers or rollers, under the action The application of pressure on the work piece surface forms the tool roll marks. 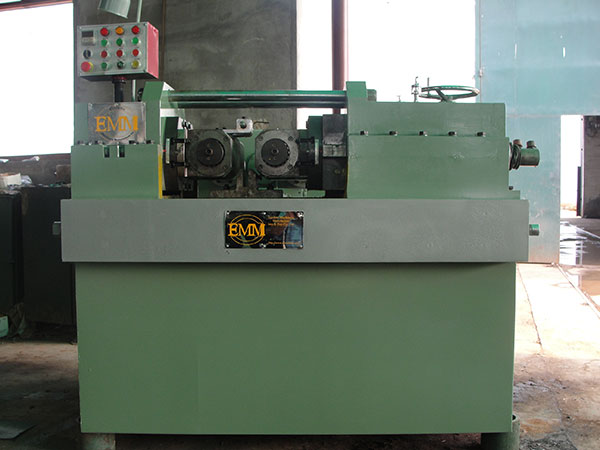 Thread shank can process external thread at the same time as inner thread. That is, it can both thread bolts, stainless steel screws and create threads for nuts (ecu). Thread rolling is one of the most efficient and economical thread making methods, so it is widely used in mass production.

The appearance of bolts and screws is very early and how is threading on the bolt body? It is certain that the craftsmen must use the manual method of lace making by hand with rudimentary tools. In the second half of the 19th century, thread rolling (thread pressing) was formed after the development of the steel rolling industry, the idea of ​​​​making wood screws by the method of pressing 2 rollers appeared.

When conducting threading of the same size, thread rolling (pressing thread) saves material because it does not generate scrap chips, improves durability and has a good surface finish.

With this method of threading bolts, screws and studs, it is possible to reduce the cost of the product while the quality of the product is still up to the optimum standard.